Residents under 18 years of age may fish without a licence when accompanied by a licence carrying adult.

The walleye is sometimes called the yellow walleye or pickerel. Walleyes are largely olive and gold in color. Walleyes grow to about 80 cm (31 in) in length, and weigh up to about 9 kg (20 lb). The walleye is considered to be a great tasting freshwater fish, and, consequently, is fished recreationally and commercially for food.

Walleye fishing begins just after the ice melts and the winter temperatures begin to fade. April begins the hunt for the trophy walleye of your dreams and runs thru late May. Walleye fishing during the summer is probably the most consistent for average size eaters to even some trophy sized walleyes. Both drifting and trolling techniques will work equally as well. Fall walleye is not to be overlooked either as it produces some of the largest catches of the year.

Success is dependent upon four factors, 1) location, 2) weather, 3) time of year and 4) method.

Walleye are strong fighters, they stay deep and wage a determined battle. Walleyes are light sensitive. They have a layer of pigment in the retina of the eye called the "Tapetum lucidum". Because of their light-sensitive eyes, they bite best around dusk and dawn, at night, or in cloudy weather. Popular baits and lures include minnows, night crawlers, leeches, jigs, spinners, and plugs, especially minnow plugs.

Sandy bottom makes for great Walleye spawning beds thus a high Walleye reproduction in the lake. Sandy lakes have more weeds, which allows young Walleyes to hide from predators and weeds create more food for Walleyes. Walleyes are easier to catch during the heat of the day because they become more concentrated around the weedbeds instead of going deep. Less rocks means you can jig right off the bottom and get less snags thus increase your time catching Walleyes.

ABOUT ONTARIO FISHING Licences
Residents under 18 years of age may fish without a licence when accompanied by a licence carrying adult.

Persons, over 65 years of age or with a valid Disable Person Card or permit do not need a fishing licence but must have proof of status on them when fishing.

ALL About Fishing in Ontario

National Fishing Week is supported by Catch Fishing, a national program dedicated to encouraging Canadians to get outdoors and enjoy our angling heritage throughout the year. It is supported by federal, provincial and territorial governments, as well as hundreds of organizations and businesses that work hard to ensure sustainable fishing opportunities while safeguarding fish populations everywhere. We appreciate your support to help keep this important program going and growing!

What to Pack?
What you are not allowed to bring into Canada: You cannot bring into the country live bait in water, worms packed in earth, hand guns and unregistered firearms or mace and pepper spray. Vegetables grown in your garden will be allowed if there is no visible sign of dirt. All fruits and vegetables are to be in the packages they came in from the store. (potatoes in the bag) 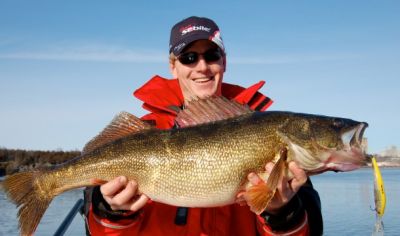 FISHING AREAS ON THE BAY OF QUINTE 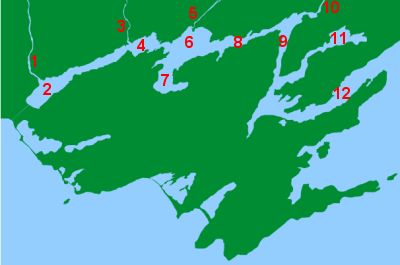 (1) Trent River: The Trent River is part of the Trent-Severn Waterway which flows from Rice Lake to the Bay of Quinte. There are many dams and locks along the Trent River which in turn creates a lot of public shore fishing locations.

(2) Trenton Bay: Trenton Bay is located at the most north western part of the Bay of Quinte. The Trent River feeds into it and the mouth of the river is a well known walleye spot. At the most western part is the entrance to the Murray Canal which is an 8 km canal that opens into Presqu'ile Bay on Lake Ontario.

(3) Moria River: The Moria River cuts through downtown Belleville and travels further north towards Tweed. The river has a good run of walleye in the spring as many fishermen line the shore of the Moria when the season opens in early May. Smallmouth bass can also be caught in areas with fast moving current. It not an uncommon site to see fly fishermen wading through the water looking for their next fish. In addition, the upper part of the Moria has a good population of muskie.

(4) Belleville Bay: Belleville Bay is located at the mouth of the Moria River and is another hot spot for walleye. It also boasts great largemouth and perch fishery. Many islands can be discovered in and around the bay which make for great fishing spots.

(5) Salmon River: Flowing into Big Bay and reaching as far up as Arden, this river has a flooded quarry which gets a lot of attention in the spring.

(6) Big Bay: Big Bay is one of the largest areas on the Bay of Quinte and can also be the roughest when a storm stirs up. Big Bay is known for its walleye and it's quite common to see boats trolling in areas like Point Anne, Horse Point, Minnie Blakely Shoal, and Big Island Shoal.

(7) Moscote Bay: Moscote Bay is a weedy bay south of Big Bay. It has a good population of largemouth bass and lots of pike. There are lots of bullrushes from which one can pull some decent sized hogs. The many batches of pencil reeds are a lot of fun to meticulously work for a trophy fish!

(8) Telegraph Narrows: This long narrow area between Big Bay & the Deseronto bridge has a good population of smallmouth and also is a favorite area for walleye anglers.

(9)Napanee River: This river runs through the town of Napanee and has a good walleye run in the spring along with a fantastic salmon run. It stretches as far up as the town of Verona.

(10) Long Reach: This narrow long stretch connects to Hay Bay and was known for its power boat races in the 1960s.

(11) Hay Bay: Hay Bay is the long arm off of Long Reach, its eastern end, which becomes shallow and weedy and has great largemouth fishing. The western end gets deeper and sees a lot of anglers trolling for walleye.

(12) Adolphus Reach: In the fall this area is jammed full of anglers trolling for 10+ pound walleyes. Its deep water which sometimes exceeds 100 feet, can be stacked with walleye making their annual migration into the Bay of Quinte to stage in front of the spawning rivers.

Bay of Quinte Fish Spawn Map
Welcome to the Bay of Quinte and one of the best fishing spots in Ontario. Bay of Quinte is part of Prince Edward County and roughly two hours east of Toronto along Highway 401. The Bay is well known as a world-class walleye fishery and serves as a spawning area for a lot of Lake Ontario's walleye population.

OTHER AREA BOAT LAUNCHES
Recommended Walleye Fishing Baits, Lures & Tackle:
3-Way Swivel Worm Harness Rig
There are a couple of rigs you may want to try. The first is the 3-way swivel rig with a worm harness. (see diagram below). The 3-way swivel rig with a 1 oz weight will allow you to troll down 14 to 20 feet deep easily. It keeps the worm harness just off bottom. With a 3-way swivel worm harness rig you want to troll as slow as you can. If you are in a boat with a motor bigger than 15hp you might have to back-troll. 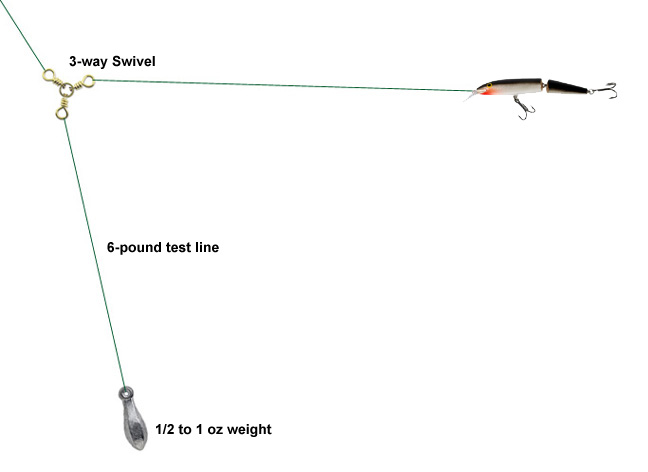 Another effective way to fish right close to bottom for Walleyes is with a slip sinker and a floating jig. If you just have a Lindy Sinker with a floating jig it's referred to as a Lindy Rig. If you use a big worm on a floating jig and inflate the worm with a hypodermic needle and add a trailer hook it's referred to as a Loten Rig. With a Loten Rig make sure the jig hook goes into the head of the worm and then out again before you hit the discolored ring on the worm, which is called the Clitellum. This way the air stays in the worm and gives it more floatation thus you can jig without the jig sinking too deep. It's also best for jigging slow while trolling. 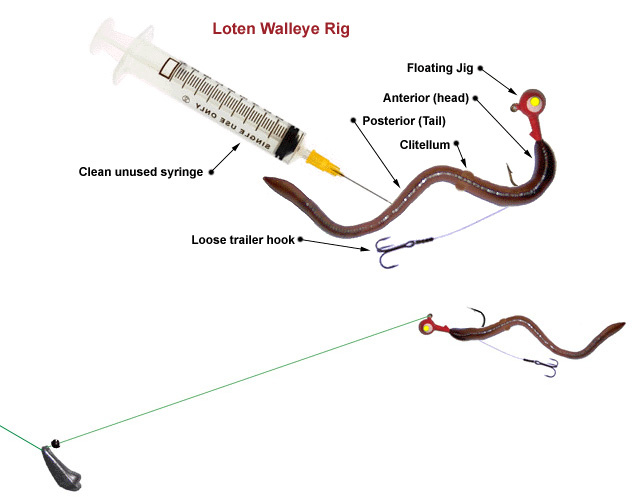 We encourage fishermen to participate in this Catch and Release Program.

Baked Walleye (Butter Lemon & Peppers)
Baked Walleye is one of the healthy ways of eating fish if you go easy on the butter. Deep Fried Walleye in Flour & Oil
Many people just roll the Walleye fillet in flour and deep-fry in oil or lard until the fillet is golden brown. This is a quick and easy way but it gets boring if you are cooking it this way every day for your shore lunch. Better have tartar sauce and lemon with this method.

Eggs & Cracker Crumbs
A very popular way of cooking fish, which was extremely popular in the 50s and 60s, yet is making a major comeback in popularity is to roll the fillet in flour, then dip in beaten eggs, then roll in cracker crumbs and fry in butter until golden brown.

Tempura Batter Walleye
If you go to the seafood section of your supermarket, you will find Clubhouse Tempura Batter, which is the batter you get in Japanese restaurants. Just follow the instructions when making the mix, except add a level teaspoon of salt. Then dip the Walleye fillet in the batter and deep fry until golden brown. You might want to make the batter a little bit thicker than they say in the instructions.

Shake-&-Bake
Lemon Pepper Shake-&-Bake is great for deep-frying. Just clean the Walleye fillets off and make sure they are damp, shake the fish in the mix and deep fry in oil or lard. For a thicker batter coating, dip the fillet in beaten eggs and then roll in Shake-&-Bake.